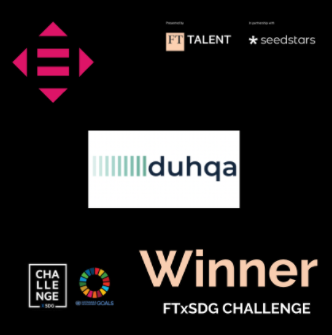 Earlier today, Duhqa was announced as the best startup in the FTxSDG Challenge. We could not be more proud! We emerged top in the reduced inequalities challenge! The competition was organised by Seedstars and financial times.

It’s a true honor for us to have won. We were first selected as top 30 startups out of +4500 applicants from all over the world, which is less than 1% of the total applicants. We then joined a boot camp culminating in the competition.

The late Nelson Mandela’s quote speaks to inequalities that exist.  "Massive poverty and obscene inequality are such terrible scourges of our times — times in which the world boasts breathtaking advances in science, technology, industry, and wealth accumulation — that they have to rank alongside slavery and apartheid as social evils."  Sub-saharan Africa is massively affected by this challenge and as an organisation operating in the continent, we have taken on the challenge.

“Income inequality is on the rise—the richest 10 percent have up to 40 percent of global income whereas the poorest 10 percent earn only between 2 to 7 percent. If we take into account population growth inequality in developing countries, inequality has increased by 11 percent” .

Did you know that according to the United Nations Conference on Trade and Development (UNCTAD), over 490 million Africans representing 36% of its population live under $1.9 a day? This means that over $980 million in purchases are happening daily. The vast majority of Africans are shopping daily from microstores known as “Duhqas”? (You see what we did there?) This means that these millions of microstores are a massive contributor to the African economy!

‍You would be forgiven to think that this is a streamlined sector. The sad truth is,  the informal and formal retail markets in Africa are fragmented. The movement of inventory from manufacturer to retailer is still a nightmare and there’s a lot that remains to be done in order to enhance commerce here. Proper movement of goods, effective supply chain systems, streamlining Small and mid-size enterprises (SME) financing and collecting data that helps those in that ecosystem become more efficient is just one of the solutions that can help.

‍Duhqa was founded to make commerce more better in Africa. We connect retailers and individuals directly to manufacturers and offer them embedded financing, logistics and inventory management tools. We quickly realised after we launched, that Duhqa was more than a for profit organisation and had so much impact in the market. On one hand, we have 66% of the “Duhqa” owners being women and hence Gender equality is a key focus. We need to drive a “more better” approach to how women entrepreneurs are treated and supported. With such a huge representation, their voice needs to be heard and more done to address their unique challenges.

We have also realised that reduced inequalities is another SDG we are addressing. By having better commerce supply chain structures, we are reducing prices of goods and services up to 10%. This then translates to a huge saving at the mass market which means the world to anyone living under $1.9.

The above two SDGs have become a key aspect of our business and we are thus tackling the same by creating our solutions with these two areas in mind.

Whereas a lot remains to be done and no one person or organisation can do it all, Duhqa is committed to play it’s part to make a contribution to addressing the challenge. That is why this award means a lot to us as an organisation. That we can be seen as a force for change when it comes to reduction of inequalities,  such a huge global challenge, and be heard on a global stage.

Our visionary CEO, Victor Maina, remains committed to driving the impact of Duhqa besides monetary benefit back to the shareholders. In his own words. “Reduced inequalities is everyone’s problem, not the government, best earners, the bigger organizations, or the rich. Granted, the aforesaid can do more. Don’t wait for others to create the solutions. Be part of the solution in your own way, there is no small way!”.

We are grateful for the recognition and the amazing work in organising the competition from Seedstars, financial times and numerous sponsors involved. We hope this motivates others to join the course in doing their part and for those doing, the encouragement to keep going. There are many SDGs to cover and each one is key yet, a lot remains to be done.